Challenging racism in the workplace

The Black Asian Minority Ethnic (BAME) staff network has been established at the University for nearly a decade. Its purpose is to be a support network for staff of underrepresented ethnicities and to drive forward race equality at Manchester when it comes to policies and procedures.

“I’ve faced less overt racism like I had when I was a child in the playground, it’s more, sort of, undermining comments from people who can’t believe that I’m in the level of job that I am. I feel like I have to constantly prove that I’m as good as everyone else, which is exhausting and unfair.”

Georgina Lewis has been part of the network since 2012 and has been co-chair for the last three years. As a black woman who has faced discrimination in the past, she says it was a no brainer for her to get involved with BAME.

“I’m all for equality of any kind. It doesn’t have to be directly affecting me; I just think fairness to everyone is really important,” Georgina said.

“I’d already been working here for three or four years when I heard about the network but as soon as I did hear about it, I signed up. My involvement has grown and now I’m a co-chair who is striving for effective change.”

Although Georgina has managed to work her way up through the ranks at the University to a manager within a faculty, she’s aware of the difficulties that peers from similar backgrounds to hers can face.

“I’ve had six jobs in the last nine years within the University, with most of them being promotions but I still feel like I’ve faced discrimination at times,” Georgina said.

“I see my progress at the University as an example to help others achieve their goals. It really shouldn’t be seen as such a huge feat because everyone should have the same opportunities to apply and progress or to just be respected by colleagues.”

“Unfortunately, it isn’t always like that but hopefully we can make career progress amongst ethnic minorities less difficult and more common.”

So, what is the BAME Staff Network doing to try and improve the situation for ethnic minority members of staff at the University? One of the key areas that they are involved in is the University’s Race Equality Charter Mark – a nationwide scheme that aims to improve representation, progression and success of minority ethnic staff and students within higher education.

“We feed in to discussions that are at quite a senior level so the University are aware of some of the experiences that people in the network have been through. This way, those at senior level can then implement the necessary policies to make sure change happens,” Georgina said.

“Unfortunately, a lot of the negative experiences that BAME members of staff have faced can be put down to individual ignorance. It’s about people and whether they’ve been correctly educated on diversity or not. You could be in a room full of 10 people and get 10 different versions of treatment.”

Although there’s still a long way to go, she believes that the Faculty of Biology, Medicine and Health are moving in the right direction.
“Although I don’t 100% know what’s happening in other faculties, I know that in this faculty there is a commitment to equality. We have regular Equality and Diversity Committee meetings where the BAME Staff Network and Race Equality Charter Mark are constantly on the agenda,” Georgina said.

“Before I was in this faculty I was in another faculty and I didn’t see the same commitment then, though it might be different now.”

It’s clear that Georgina believes there is still a way to go until everyone from every ethnic background is presented with equal opportunities. She believes the University could be doing more, with bronze Race Equality Charter Mark award being just the first step on a pathway to race equality.

In terms of the BAME staff network, Georgina has been re-elected to continue her work as co-chair and has already set out her plans for the future of the network.

“I would like to see us continue to grow. We do have a good size membership but the problem is we don’t have enough BAME staff at the University to begin with,” Georgina explained.

“I would really like to see us be involved in initiatives that would help to grow that, so that there is a big population of staff with a BAME background.”

Find out more about the BAME staff network at Manchester. 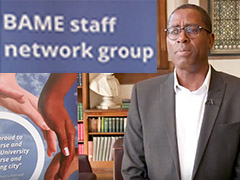 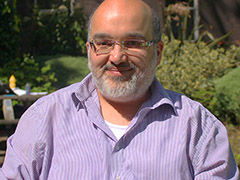 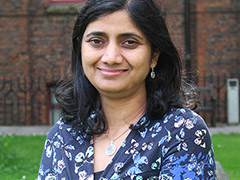