Transitioning gender is a very personal and potentially expensive journey that can take years. Transgender and gender non-binary people can encounter ignorance, discrimination and hate crime, as well as a lack of resources – there are only seven Gender Identity Clinics open in the whole of the UK to serve a community estimated at up to 500,000 people.

For those transitioning, having a voice that matches their gender identity is an important part of feeling comfortable and confident. They have to learn how to use a potentially changing voice, or match their voice to a changing appearance.

But there are barriers to receiving speech and language therapy, including logistical problems in securing sessions with qualified therapists who are familiar with clients on the trans spectrum.

Dr Sean Pert, Senior Lecturer in speech and language therapy (SLT), appreciates this more than most and runs regular voice and communication workshops, alongside SLT students, for trans and gender non-binary individuals at the LGBT Foundation in Manchester.

“Speech therapists have been with working the trans community, in particular trans women, for a number of years now. However, we now have to be aware of a much bigger spectrum of trans people,” Sean says. 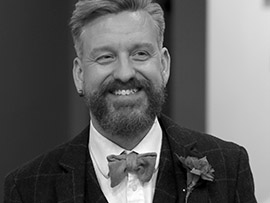 Sean is a Senior Lecturer in speech and language therapy and has over 20 years' clinical experience in the NHS.

“There are trans men, who people don’t really consider in the same way as trans women. Their voices drop quite quickly when they take testosterone; however, a lot of them still don’t know how to use that new range properly and we can help them with that.”

“Trans women are really interesting because people who are born male go through puberty and so have thickened vocal cords and a tilted larynx or voice box. Trans women's vocal tracts don’t change when they transition to the female gender. Through acting and vocal techniques you can get a good female spectrum voice with practice.”

“Then there are gender non-binary people who may want to use aspects of both male and female communication techniques.”

Despite working with trans community for a number of years, Sean started his career studying an entirely different area of SLT; bilingual children.

However, a chance meeting with the head of the LGBT Foundation took his career on an entirely new path.

“I went to an event held by Stonewall and Paul Martin OBE, Chief Executive of the LGBT foundation, said they’d just set up a trans programme for the first time. As a gay man myself I was already interested and wanted to help with funding but then he mentioned that they were going to need speech therapists,” Sean explains.

“So, I was like ‘Hello?!’ and although it wasn’t my specialist area at the time I knew there would be a big demand for it and there was.”

“We expected around ten people to turn up for the first session but it ended up being 36! There’s a huge demand for it and we’ve been oversubscribed for every session since that first one.”

“The biggest reward for me is seeing the trans community being recognised and ultimately the notion that we can support the most vulnerable groups in our society.”

One big obstacle that has hindered these sorts of schemes in the past has been the stigma attached to working with trans community, as well as the perception that the work is ‘too niche’ and complex.

“When it comes to this area of SLT, many speech therapists often don’t want to do it because it’s too specialised. I think this is an excuse because it’s straightforward voice work. Yes, you need to know about trans issues, but it really isn’t that complicated”, says Sean.

So, how do you work around these issues? Get students involved.

“I thought if I could get SLT students involved they would be less frightened about trans work in the future, and the response we got from them is terrific. The students are giving up weekends for free. Although they’re getting a lot from it too, that attitude to helping people for free is fantastic.”

To say that the students have embraced it with open arms and an open mind would be an understatement.

“A lot of the attendees were really overwhelmed that the students wanted to help and get to know them. They were really supportive and genuinely interested in their lives and, on the flipside, it’s really benefitted the students in a learning capacity,” says Sean.

“Students get to help a client group who generally receive a poor level of service whilst also learning vital skills along the way. They are trained by the LGBT foundation in sessions run by Louie Stafford, a trans man, and he talks about how to address trans people and how to make them feel comfortable.”

Sean’s work hasn’t gone unrecognised. In 2017 he won a University of Manchester Making a Difference Award for Social Responsibility and then more recently he picked up a Staff Volunteer of the Year Award. Both awards were given to him on the basis of his voice and communication work with the trans community.

“First and foremost it was great to be nominated by the students and fellow staff, it wasn’t expected at all,” Sean insists.

“When we won I was absolutely gobsmacked. It’s lovely to be recognised for your work but the biggest reward for me is seeing the trans community being recognised and ultimately the notion that we can support the most vulnerable groups in our society.”

Sean’s work with trans and gender non-binary individuals is far from done, especially with the support he continues to receive from the University. He’s looking to provide more services for the community and has joined the LGBT Foundation’s committee to help gauge what more can be done.

A new website is also up and running which gives SLT students access to vital work materials while, on a more national scale, Sean has joined the transgender non binary CEN at the Royal College of Speech and Language Therapists to get as many therapists equipped with this knowledge as possible.

Find out more about voice coaching workshops for trans and gender non-binary individuals. 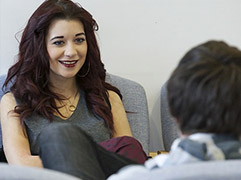 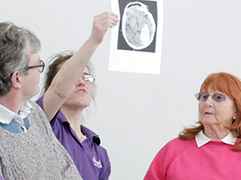 Working together with public and patients

Embracing my stammer helped me fulfil my dreams