Plastics are cheap and convenient but their production and waste take a massive toll on the environment. Leading the way in achieving the University’s pledge to eliminate avoidable single-use plastic usage by 2022 are Maggy Fostier and Ruth Grady, lecturers in the School of Biological Sciences who are determined to reduce single-use plastics in the lab.

“I’ve worked for the University for 17 years now and have been involved in undergraduate practicals for that entire time”, said Ruth.

“We try to mimic what goes on in real life research labs, and it gradually dawned on us that we use an awful lot of plastics and just throw them all away”.

First year lab classes involve thousands of students per year who require pipettes, weighing boats, stirrers, gloves and other plastic implements which sometimes can have usage lifespans that are less than a minute.

“Our numbers in terms of single-uses plastics were getting out of control”, explained Ruth. “A lot of the time we just used items for a few minutes for a demonstration and then threw them away. You’re doing this over and over again throughout the year and it adds up to an incredible amount.”

Maggy added: “We come from a time where we used to do practical work with glass. Plastic came along and simplified life in the lab, but we are now starting to realise the negatives of that”.

Considering how many single-use plastics were being used in undergraduate labs within the school, it wasn’t going to be a simple case of things changing overnight; they needed a plan.

The approach that Ruth and Maggy chose to take was known as the 6Rs, where they would audit their labs and look at different ways in which they could make changes to improve sustainability and reduce plastic use in the following ways:

“The 6R approach is taken from the 3R (reduce, reuse, refine) approach which looks to reduce the number of animals in research, something else that I am concerned with,” Maggy explained.

“The 6Rs can also be adapted to day-to-day life, whatever your situation may be. It makes you very aware of when you’re using plastics and once it’s in your head it’s hard not to notice it.”

Their plan was also helped massively by the lab technicians in the school.

Ruth said: “The technicians were on board from the beginning, they changed as much plastic as they could from their end, and they’ve been instrumental in making our plans come to fruition.”

““We used items for five minutes for a demonstration and then threw them away… doing this over and over again throughout the year, it adds up to an incredible amount.””

Changes in the lab

Most of the actions implemented have been simple, often reverting back to how things were before disposable plastic became so rife.

For example, in the light spectrophotometry practical, students are now reusing plastic cuvettes, and using glass universal and bijou bottles after rinsing them between uses or dilutions. In microbiology classes, plastic loops have been replaced with wooden stirrers.

Refining the way the material is laid out in classes also helps, so buffers and solutions are now organised per bench rather than per pair, and the technical team refills containers between repeated classes when possible.

Although the COVID-19 pandemic has paused lab work, the early work done by Maggy and Ruth has led to serious plastic savings. Their actions created a reduction of up to 31 pieces of single-use plastic per student (depending on the practical), and a total reduction for the year of 37,000 pieces.

If the lab technicians set up the lab in a way where plastic isn’t available to be wasted, then plastic savings can be made, but if the students enter the lab with a sustainable mindset then even more is possible.

Once they knew what changes they could make without affecting experiments, the lecturers trialled them with a group of first year volunteers. Students were then involved in helping to put a communications plan together to roll out the changes, which have been well received.

“Before lockdown”, Ruth explained, “we began to trial this new sustainable approach in first year labs and subsequently conducted a survey with first year students and the results came back showing that 97% were glad that we were being active with this.”

“Just for transparency, though, we’ve badged each practical that’s been changed to say it’s been audited for plastics so people are aware that there’s a reason why they’re having to re-use and wash certain equipment.” 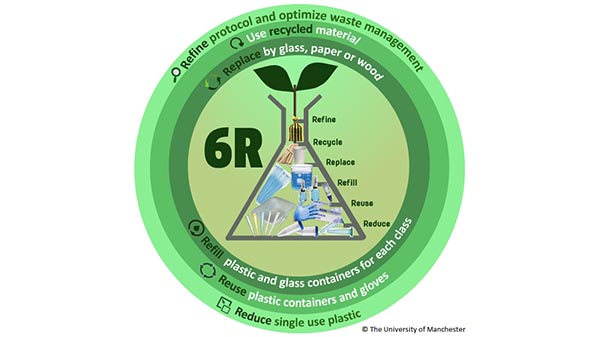 Maggy and Ruth are both adamant that this is only the beginning for this project and there are plans to expand it not only across other years in their school but across the entire faculty too.

The University’s dental school and the School of Health Sciences had started auditing some of their practical classes prior to lockdown, and Maggy and Ruth are hopeful this trend will continue once lab work restarts.

“We’d like the changes to be implemented across the whole faculty and plan to contact all members of staff who are responsible for practicals and ask them to review them to see where they can make savings”, Ruth said.

“The Head of Teaching and Learning is on board with the idea that these practical reviews should be mandatory, but unfortunately COVID came along so everyone is now more concerned with how they are going to actually deliver practicals virtually.”

“As a result, we’re not going to have time to try and engage with this for semester one but once things settle down again, we’re hopeful that these reviews can take place.”

Their ambitions for the future of this project don’t end there, however, with research labs next on the agenda. Although they appreciate that single-use plastics are justified in research labs, an audit may reveal that a couple of pieces of plastic could be saved.

Maggy said: “It may not seem like much, but the domino effect of it would result in quite a large number of plastics being saved, which could make all the difference”.

Discover biosciences courses at The University of Manchester.