A change to lung cancer screening policy has been announced following the results of an unusual scheme pioneered in Manchester. It found one case of cancer for every 33 people screened, three times as many as conventional approaches. Dr Philip Crosbie outlines why Manchester was the perfect place to trial the study and how they’re already responding to the next challenges in lung cancer research.

What we’re dealing with today is the legacy of smoking and socio-economic deprivation over a number of decades. That’s why Manchester has the highest rate of lung cancer deaths in the country. It kills more people under 75 than any other disease and more than all other cancers combined.

Mortality rates are so high because most people are diagnosed with advanced disease, when it’s too late, and survival is generally measured in a few months. Early lung cancer is eminently curable, but notoriously difficult to detect because if often causes no or only very mild symptoms. So our challenge is to detect lung cancer earlier. If we can, patients will stand a much greater chance of surviving.

Manchester has a reputation for excellence in lung cancer diagnostics, treatment and research; we are home to Cancer Research UK’s Lung Cancer Centre of Excellence. It was this reputation for clinical and research excellence that led the Macmillan Cancer Improvement Partnership, funded by Macmillan Cancer Support, to task us with transforming outcomes for patients with lung cancer.

When asked what needed to be done, with no hesitation we said screening. It was instant. Waiting for patients to present to us with symptomatic disease leaves things just too late. So it wasn’t a case of asking what should we be doing? Could we try this or that? But more, what does the most effective screening model to increase early detection look like? How do we achieve good uptake in those most at risk?

The paradox for lung cancer screening is that those most at risk, smokers in areas of high deprivation, are also those historically who are least likely to attend. We considered these factors and said, why not just make it easy for people? Why should people have to factor in finding a parking spot or paying for hospital parking? And what if a lack of reliable public transport was a concern for people too?

We simply wanted to make the whole process as easy as possible and to take screening out to the community, and that’s what we did. We wanted it to be a ‘one stop shop’ so people didn’t have to keep coming back for more appointments.

We also thought about the psychology of healthcare and rebranded it. We didn’t call it a lung cancer test because that’s frightening, we called it a lung health check. These small but important changes worked. People came to see us and demand was very high. Indeed, the success of the screening programme resulted in NHS England announcing that our Manchester screening model will be rolled out to other sites across the country. We’ve achieved a national policy change by designing and delivering an innovative screening approach.

Our pilot scheme sited mobile, low-dose CT scanners in supermarket car parks, community hubs and shopping centres in three deprived areas of Manchester. We arranged for GPs to send letters to smokers, and those with a history of smoking between 55 and 74, inviting them to attend the van for a check whilst they were out and about meaning they didn’t have to go to their GP or to hospital.

The resulting demand was huge, Macmillan gave us extra money to allow us to see additional patients who had requested appointments but who we couldn’t see during the study period.

More than 2,500 people underwent spirometry tests and answered health questionnaires, of which about half were offered an immediate CT scan based on our assessment of their need. The scans led to 46 cases of cancer being discovered, 80% of which were at stages 1 and 2. Fewer than 30% of cases are diagnosed at these stages through the usual care pathways after symptoms are reported. The proportion discovered at stage 4 was just over 10%, which compares with nearly 50% normally. The scheme also resulted in diagnoses of chronic obstructive pulmonary disease in 20% of those attending.

The outcomes highlighted the critical clinical need for this intervention, and by targeting those at greatest risk in deprived areas we detected a three-fold incidence of lung cancers as compared to the international average. 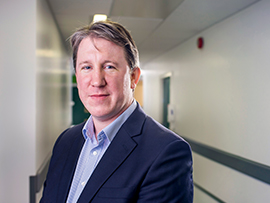 Dr Philip Crosbie is a Clinical Senior Lecturer in the Division of Cancer Sciences at The University of Manchester and Consultant in Respiratory Medicine based at the University Hospital of South Manchester.

Generally, 75% of patients have stage 3 or 4 lung cancer when diagnosed. This is, sadly, rarely curable. Earlier screening shifts the balance in terms of who can survive, with 80% of incidence being detected at stage 1 or 2 which is far more curable.

Increased survivorship however creates new and different challenges for us as we move from an end of care, palliative response to treating the disease, to surgery and treatment. This new focus on surgery brings an immediate and associated capacity issue.

Increased surgery requires more surgeons, anaesthetists, nurses, radiologists and theatres as a start. In response to these new and not inconsiderable challenges that arise from such a shift, we’re already looking at how we can address them as a research community.

We’re looking to technologies and the role they can play. We’re collaborating with industry to develop software to help us. Radiomics will help us be more precise and faster when looking at the radiographs. Better precision means better detection, and if we can speed up the process then we can increase the numbers detected.

Manchester is without doubt the best place in the UK to lead lung cancer research. We have the unique mix of a population requiring help, a world-leading lung cancer centre, the University’s multidisciplinary expertise, the UK’s leading lung cancer team and largest thoracic surgery site within the Manchester University NHS Foundation Trust, and Europe’s largest cancer hospital. This combined with the scientific infrastructure makes things happen. All the parts of the jigsaw are here.

It’s simple in Manchester, you can make changes and we’re empowered to do that. We’ve created an environment where people can excel and where we’re all working together because we have a shared vision. We’re multidisciplinary and that coordination increases effectiveness. Gradually people are seeing the value of prevention and detection for lung cancer. We’re getting there. 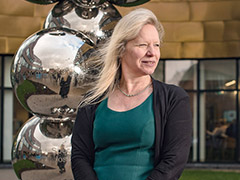 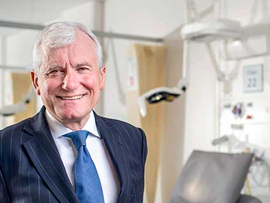 Benefits of partnership: The Christie perspective 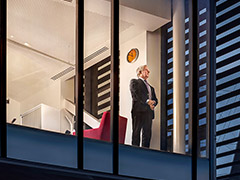